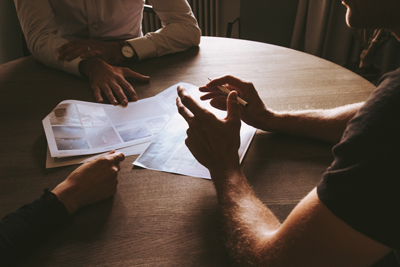 At which point does a discussion become a conflict? Our very existence is characterized by human interaction, both private and professional. And one aspect of human interaction is conflict. When conflicts arise among team members at work, how should you, as their leader, respond?

Before deciding how to respond to one, it’s good to have a clear concept of what constitutes a conflict in the first place. Your definition of conflict is mostly likely, like everyone else’s on the planet, subjective. You may consider a heated discussion is the epitome of conflict, but an emotional encounter is not necessarily a conflict. A conflict ensues when, in the course of a discussion, irreconcilable differences arise, and the two sides of the argument refuse to budge. Opposing opinions embody potential conflict, but are generally not conflicts per se.

Must leaders then sit on tenterhooks, waiting for the next conflict to arise and escalate? Of course not. A firmly welded team, structured on respect for each member and his or her limits and potential, can usually discuss and solve differences in opinion without a hitch. Even when a conflict arises, the team is quick to dissolve hostilities without mediation. Discussions, as well as conflicts, can become highly emotional. This, however, doesn’t automatically imply irreconcilability. Vital to reconciliation is your leadership role as mediator, calmly finding a solution to satisfy both parties.

Yet, maybe you prefer to avoid conflict, sweeping them under the rug instead of meeting them head on. You feel unequipped to handle conflicts or your antenna failed to register the conflict in the first place. Unfortunately, an ignore-it-and-it-will-go-away attitude will not solve the problem. Unresolved conflicts will arise again and again, will be further incited and eventually evolve into rivalries between co-workers. A conflict is comparable to a wildfire – extremely difficult to contain once it’s spread beyond control. The result? A dramatic drop in productivity and performance, as 70% of the energy that should flow into work processes is now invested in the conflict. The entire team is caught up in a vicious circle and is ultimately crippled. Thus, it is critical to your business to intervene early on, nipping a burgeoning conflict in the bud. Sometimes, you may want to call on external guidance. In the initial phases of a conflict, you are best served when you invite talks with those concerned. Normally, one-on-one talks bring the conflict’s root to the surface, allowing you to quickly resolve the problem. Should the conflict have deeper roots, and proffered solutions as well as attempts to reach a consensus are rejected, then external support is mandatory.

Don’t fall into the common trap, believing professional support is a sign of weakness. We all have our limits and serving your business is the first priority. Sometimes, the factions are so unyielding they require a completely new approach and perspective to get things back in motion.

There are numerous models describing the opportunities and risks of varying levels of conflict escalation. For example, Friedrich Glasl’s Nine Stages of Conflict Escalation is often cited. We work with five escalation stages, moving from discussions that are easily solved internally, through manifested negative emotions to hitting rock bottom, where those involved are hellbent on winning, on doing damage to, or even on destroying, their opponents. Transferred onto your business, once the situation has reached this ultimate, fifth stage, you must step in and make a clear decision. A consensus or compromise leading to reconciliation doesn’t stand a chance. Your decisive action invariably includes separating the warring parties, i.e. someone has to be transferred or let go. In the fourth stage, characterized by suspicion and hostility, we recommend external mediation to ensure a wholly neutral perspective, input and communications. The third stage, before positions reach the point of paralysis, is mediated inhouse, either by you as team leader, or by a personnel or employee council colleague. As a rule, conflicts in the first two stages can be resolved by the opposing parties themselves.

Often, just hearing the word conflict stirs negative emotions and thoughts. But, to be sure, conflicts are also chances to strengthen and solidify your team. Conflicts point to problems, inspiring the will to find solutions and bring about change. Conflicts compel us to become active, to deepen team relationships and solidarity. Conflicts allow employees to get to know each other better, to learn tolerance for one’s own and other’s viewpoints. Conflicts prepare us to make better decisions and to present our arguments more clearly. On the whole, conflicts promote our personal development. Not everything that seems negative at first has negative repercussions. Every day has its share of challenges, and conflicts are just one of them; one we can use for our personal growth.