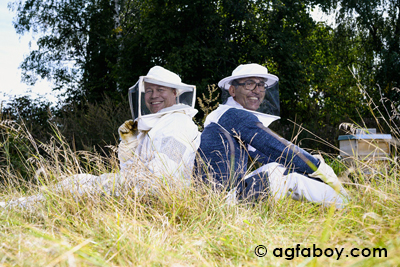 Today’s blog entry is about fascination, sensory impressions, relaxation and the good things in life. It’s about what two Liscia Consulting CEOs and consultants do when they’re not advising, training or coaching.

As the title implies, it’s about one of the most important pollinators on the planet. Einstein allegedly claimed that without them, humanity would have but four years to live. Frequently cited, the quote has never been verified – neither the dramatic results on an Earth without bees, nor that Einstein actually foretold it so. Nonetheless, the pollination power of the honeybee is undisputed.

Just about three years ago, Jan and Marcello Liscia caught a buzz on bees. A vague idea became a passionate commitment and trademark name. What began with two colonies, expanded to their current apiary of 30 colonies. If you keep in mind that just one colony, at its highest point, has a population of 50,000 to 70,000 individuals, well, that’s an awful lot of pets.

Launching their beekeeping education with a beginner’s course for young beekeepers (young referring to time in the field, not years on the planet), Jan and Marcello’s fascination for this small, impressive insect grew from workshop to workshop. All the more so as they tended and observed the two colonies in their own back yard between schooling sessions. Precise and systematic, these social creatures serve Nature as Nature serves them. Dining opulently on the multifarious menu, bees in turn produce concentrated edibles such as propolis, pollen and, of course, honey. Extraordinarily impressive!

Delving into this world so new and unexplored, the beekeepers are rewarded in a myriad of ways – delighting in the sight of golden-yellow honeycombs, in the smell of bees and honey, in the soothing hum as worker bees leave and return to the hive, and in the time. Time to unwind and relax outdoors, turning eyes from the computer to observing the epitome of life.

The simple walk to the apiary, outside, fresh air and physical work – after all, a full honey frame weighs 20 kilos or more and must be regularly lifted off to control the brood chamber underneath – goes a long way toward breaking down stress hormones, creating space for happiness hormones. Because, it’s not turning off our daily routines that relax our bodies and minds, it’s turning toward something else that fills us with happiness and satisfaction, be it beekeeping, time with the family, a good book or sports.

From initial passion to passionate hobby, the two beekeepers harvest much more than honey. They receive high praise from their honey fans and enjoy many illuminating conversations with people they would have otherwise never have met. Best of all is the endless discovery of and fascination for the honeybee microcosm that triggers a wondrous smile on their faces, certain to bring them a surprise or two in the years to come. 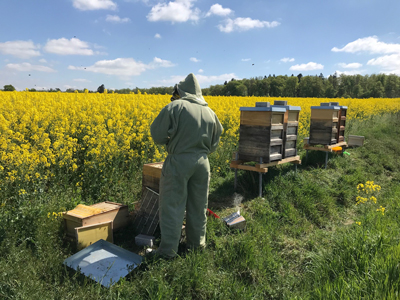 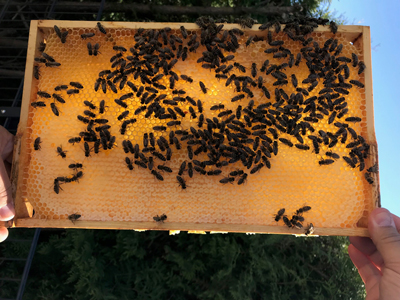