What is often said 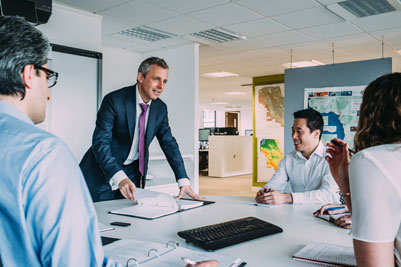 Many supervisors may be in the right position, but does that make them the right function? The terms leader and manager are often used interchangeably, although there is a big difference.

Attending to the direct superior’s role within the company, and whether she interprets it correctly, is decisive. Does she see herself as a manager or as a leader? Does she act accordingly? The precise differentiation of these two positions is one of the first messages we put across in our leadership training sessions. Our experience reveals that many companies are wholly unaware of the far-reaching consequences a misinterpretation brings about.

They are oblivious to the threat it poses to their company or project. Management manages – structures, numbers, data and facts. You could also say management primarily governs the factual-rational and analytical aspects. A manager maintains processes and systems.

A leader, however, and this is the crux of the matter, works with people, for whom she is responsible. She is accountable for their well-being, as far as it is within her power. She is required to create an environment in which they enjoy working, can evolve further and advance their team. […]

All the same, when taking a closer look, it turns out that the same errant placements had been made in the past, repeatedly. We then advise such enterprises to rethink their future recruiting strategy, examining more closely just who they take on for which position. Certainly, mistakes happen, but repeating the same mistake is avoidable. As Albert Einstein put it, “Insanity: doing the same thing repeatedly and expecting different results.”

Therefore, HR departments should pay more attention to the skills required for a certain position. Do you need a manager or a leader? Instead, they only look at the candidate’s trade-specific knowledge and experience. Of course, it is advantageous if a candidate has, for example, worked in Brazil for five years. Foreign experience always looks good on a resume, although it rarely states whether the person had a leading or managing role. A more significant question is what that person’s precise duties were in Brazil, and whether they are relevant to the position you are looking to fill in your company. […]

When defining the difference between these two distinct roles and their responsibilities, we like to use the following analogy: Leaders are responsible for providing a professional home for their employees; a piece of Earth where they feel comfortable and productive. The manager, on the other hand, builds the house on the land, since without a roof over one’s head it’s hard to feel at home. Both functions should work hand in hand. A company needs both a manager and a leader, so categorizing the two into stronger/weaker; better/worse is utter nonsense. The only important thing is to define very clearly which aspects are required for which position.

Yet not every enterprise has the financial means to hire two people. Above all, in small and mid-sized companies, the roles of leader and manager must often be enacted by one and the same player, even if he would rather concentrate on the one or the other. […]

Hence, the first and most decisive question is, “What am I really? Do I lead, or do I manage?” When we speak of dedication, we are not speaking of dedication to management. The D.R.E.A.M. of LEADERSR deals with dedication to people work, working with and on the human beings who are dependent on you and your function. The difference between leader and manager is not hierarchical, yet there is a difference and it has a significant impact on your company’s success. Numbers can be managed – people can’t. People must be led. 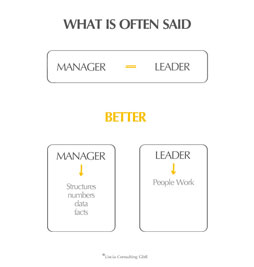