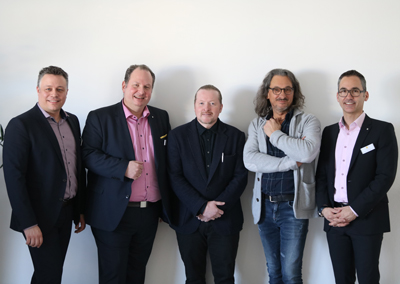 “Attention leaders, it’s Think Tank time!” The call went out in 2018, when Liscia Consulting GbR invited People Work people from all over Germany to the third event in the series. Following an 18-month break, the 3rd Think Tank Leaders in Action offered an excellent program in the consultancy’s home offices in Paderborn. In addition to three informative lectures, networking and mutual exchange prevailed throughout the event. Familiar faces refreshed known acquaintances, while first-time guests made new contacts. The opening lecture, I know why everything always goes well!, given by the internationally successful artist Herman Reichold, provided interesting impulses from his creative thought-shop. Reichold’s unusual approach certainly inspired reflection among many guests, which was evident during the ensuing Q&A. An excellent lunch followed, satisfying both bodily needs and appetites for lively exchange. Satiated and ready for more, the second lecture, given by Joey Kelly, began. Once best known as a member of the Kelly Family in the 1990s, Joey Kelly is now an extreme athlete and entrepreneur. His biographical narrative, infused with impressive photos and plenty of humor, revealed how stamina, goal-setting, will and passion took him where he wanted to go. His experiences with endurance sports and as a performing Kelly Family member taught him to follow his objectives with iron-clad discipline, ambition and determination, creating ever new challenges for the days to come. Equally entertaining and informative, Joey Kelly depicted the transfer of his experience onto his professional life. Many questions on Joey’s experiences and future goals followed the talk, closing with the speaker extending an invitation to this year’s endurance challenge – to cross the Alps from Munich to Venice, on foot, without money or provisions. Gianni Liscia rounded off the lecture program with D.R.E.A.M. of LEADERS meets Gen Z, illustrating the challenges of today’s leaders – the first to be confronted with leading teams composed of four different generations. Not only the varying value systems were addressed, the differing demands newer generations have on their employers was also examined. During the subsequent discussion, not only the emotional impact on attending leaders was palpable, the issue also conspicuously reflected the reality of their everyday professional lives.